In the context of a stable decline in the quality and quantity of solid fuel for the production of heat energy in Ukraine, consumers have to look for non-standard solutions, in particular, for the combustion of low-grade fuel. Heating equipment manufacturers, for their part, are improving the methods of burning such fuel. The pyrolysis (or gas generation) technology has become one of the most efficient and promising ways of generating heat energy, showing high efficiency and allowing the use of a wide variety of fuels, including household waste. The principle of pyrolysis combustion is used in solid fuel pyrolysis boilers.

FOCUS has been developing and operating pyrolysis boilers since 2014. During this time, she identified and adapted all the nuances arising in the process of their operation from the side of the consumer and personnel, and released on the market products of her own design - reliable high-performance pyrolysis boilers FOCUS. The equipment is intended primarily for semi-industrial use, in boiler houses of agricultural and industrial enterprises, provides efficient and cost-effective heating of buildings and structures.

FOCUS solid fuel pyrolysis boilers can use hybrid fuels, including pellets (burned using a pellet burner), firewood, fuel briquettes, furniture industry waste, plastic, household waste, etc., with minimal emissions into the atmosphere and without the characteristic unpleasant smell. For high-quality waste incineration, it should be combined with wood or briquettes.

The principle of pyrolysis combustion of solid fuel is as follows: under the influence of high temperatures (over 1100-1500 ° C) and in conditions of a lack of oxygen, the fuel decomposes into volatile (pyrolysis) gases and a solid residue. During pyrolysis decomposition, the heating of the air improves, which dries the fuel in the bunker, after which the fuel enters the combustion zone through the nozzle.

Waste flue gases in such boilers have an insignificant concentration of harmful substances, emissions of carbon dioxide CO2 are several times lower than the permissible norm. All thanks to the formation of a high-temperature torch - the supplied oxygen is mixed with the released gases, the active carbon is burned. The pipes are practically not clogged, the ash content is extremely low. Accordingly, if buy pyrolysis boiler instead of a conventional boiler, cleaning will be required much less frequently.

The boiler consists of an afterburner (lower) and a fuel tank (upper). Fuel is loaded into the upper chamber and prepared for pyrolysis (drying, heating, gasification). The combustion process begins on the bottom of the bunker in conditions of a lack of oxygen. Then the released gases are mixed with oxygen and afterburning takes place in the lower chamber.

The FOCUS pyrolysis generator boiler has a number of distinctive features and advantages that have no analogues in other manufacturers:

The doors are thermally insulated and do not undergo thermal deformation at maximum operating parameters. The security group is not included in the kit (purchased separately). If necessary, the manufacturer manufactures boilers of various capacities according to the standard range, for FOCUS pellet burners.

Setting and operation of pyrolysis boilers

The FOCUS pyrolysis boiler is installed in a separate boiler room. Adjustment and adjustment takes place taking into account the existing operating conditions. The automation of the equipment makes it possible to set the required blower blowing power, the frequency and duration of blowdowns.

The firing up of a pyrolysis boiler follows the same principle as firing up other boilers. A small volume of the first bookmark is loaded into the chamber, ignition is performed. The main volume of fuel is reloaded when combustion becomes stable. It is allowed to use large firewood, up to 20 cm in diameter. When using firewood, the boiler cycle can be 8–48 hours.

The onset of pyrolysis is accompanied by the closing of the chimney damper at temperatures above 60C. A torch is formed in the lower chamber. You can add fuel at any time.

The required work power is achieved automatically by increasing the intensity of air supply to the combustion chamber. The forced airflow is switched off as soon as the rated heating capacity is reached. The internal temperature can rise by inertia, after which it will gradually decrease. The boiler operates within the temperature set by the operator. If there is a lack of oxygen, forced air purge is reactivated.

Cleaning and maintenance of pyrolysis boilers

In a pyrolysis boiler, maintenance is required for 4 parts:

In the context of a constant rise in the price of gas and fossil fuels, the pyrolysis (gas generating) boiler FOCUS offers a profitable alternative - it provides a fairly complete processing of biofuel into producer gas at a high combustion temperature, which is the reason for the economic effect. In pyrolysis (gas generation) mode, with correct high-temperature combustion and a developed convective heat exchanger, the FOCUS boiler achieves a rare efficiency indicator - 92%! Maximum efficiency of work favorably distinguishes this type of equipment among more expensive electric and classic boilers.

Buy pyrolysis boilers FOCUS - this is beneficial, since such equipment gives a quick payback due to high efficiency, as well as due to the transition to waste fuel, waste, combustible residues that are inevitable during construction or repair work, in the manufacture of various products (in the agricultural sector, printing house, furniture production, other areas of activity). A significant economic difference is a compelling argument to consider waste from economic activities as an alternative fuel and not save on heat by heating all the necessary premises and open areas.

High economic efficiency - heating savings up to 500%. The efficiency is up to 92%, which no alternative heating system can boast of.

The pyrolysis combustion process involves the use of different types of alternative fuels, including industrial waste and garbage, while not polluting the atmosphere and not requiring frequent maintenance. Recycling becomes directly effective.

Due to the automation of such equipment, a person does not need to constantly be near the boiler, and one working cycle can last up to 2 days. High power and large chamber volumes provide efficient heating of large industrial, semi-industrial and residential premises.

Buying a FOCUS pyrolysis boiler is a long-term investment with obvious benefits. 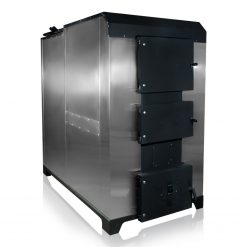 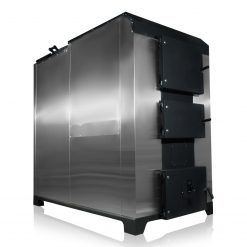